In a previous post, I outlined some of the various types of services that various translation buyers might be looking for, including transcreation. Earlier this week, I shared an article about transcreation written by David García Ruiz of Trust Your Brand that incited some lively debate on Twitter. Most of the debate centered around this graphic:

Many readers did not agree with his categorization of these three services. See one reaction from Charlie Bavington below:

@Bentranslates Plus I've yet to be persuaded that transcreation is not a subset of translation used under specific circs.

I decided that in light of this debate, I wanted to take the time to provide my two cents on the subject.

What is transcreation, again?

As David defined it in his article, “transcreation is creative translation with a very high level of adaptation, so high, that in fact, there is usually no translation.” According to everyone’s favorite free online encyclopedia, “transcreation is a term used chiefly by advertising and marketing professionals to refer to the process of adapting a message from one language to another, while maintaining its intent, style, tone and context” (Source: Wikipedia).

So, what’s the big deal?

In this previously linked article, Gabriel Fairman of Bureau Translations says the term transcreation is “catchy, trendy, romantic and a big fat lie.” He goes on to explain, “translating well and transcreating are all the same thing. A good translator will know when to be more creative to reach the required ultimate goal of the text they are working on and even if they do not know, they will know how to ask the right questions. Each text will implicitly call for the appropriate level of adaptation to succeed.”

He’s not alone in this assertion. Many of the translators who reacted on Twitter said similar things. As I’ve mentioned before, translation involves the transferring of ideas and feelings, not merely words. For transcreation, the thoughts, feelings, and emotional responses of the reader are the most important factors. So why separate transcreation out at all?

Transcreation does involve a different process

Transcreation and translation involve different sets of skills. Yes, a proficient translator can switch between them at the drop of the hat, but that does not mean the skills that are being used aren’t different. In his article, Fairman uses the example of technical documentation, which must still appeal to the user’s experience and anticipate her reaction to certain words or phrases. He is correct. However, it could be argued that for technical documentation, all other things equal, technical knowledge, proficiency, accuracy, and consistency trump brand sensibility or emotional response. On the other hand, the knowledge that is put to the test in transcreation is almost entirely cultural: pop culture references, marketing language, and cultural sensitivity, in addition to consumer buying trends, etc.

Word for word, transcreation is a more time-consuming process than translation. Whereas the metric that many translators use to estimate their daily output is around 300 words an hour (subject to a host of factors, of course), it can take many hours to find a suitable transcreation for a four-word tagline. In the transcreation process, translators generate multiple versions of their target text, confer with colleagues about their impressions of each version, incorporate client feedback, and whittle their possibilities down to something that is both culturally appropriate and suits the client’s needs. Translation as it is defined here does not require as much client involvement.

By calling it something new, it fights against commoditization

The translation industry is currently resisting a trend towards commoditization. With accelerating globalization and an increasing demand for translation around the world, buyer power is increasing and is subsequently driving down rates. Many translators who do not know how much they are really worth accept less than they are due for the translation services they provide. But transcreation is different because it is easier to sell clients on the value of a service that requires creativity and cultural knowledge. Every translator knows that all translation requires creativity and cultural knowledge, but many buyers aren’t convinced. A fancier name can allow some providers to charge a premium, which is not necessarily a bad thing.

Finally, I would like to propose two new graphics to illustrate the relationship between translation, transcreation, and copywriting.

As described above, transcreation is a subset of translation. At its core, translation is a matter of translating not just words, but feelings, ideas, and cultural sensibilities. As such, it does not make sense to separate them or to hierarchize them. I would therefore propose this graphic as an illustration of the relationship between translation and transcreation.

That said, I do think it is useful to propose a visual for how translation, transcreation, and copywriting relate to each other. Rather than a pyramid, I propose a Venn diagram: 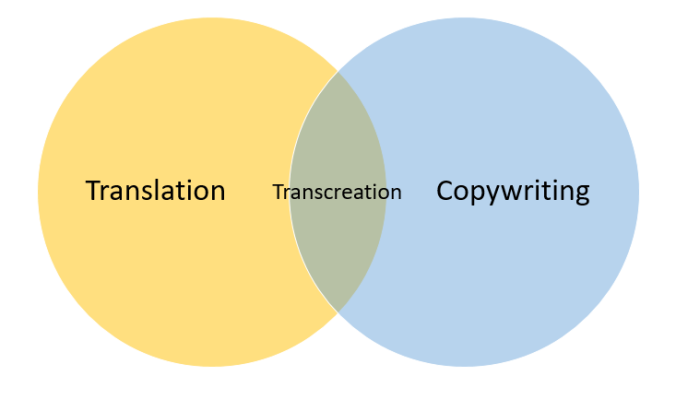 In this diagram, transcreation is shown as a blend of the translation and copywriting processes. Whereas translation does not involve creating material from scratch and copywriting only involves the creation of original content, transcreation is a hybrid: the translator relies on his or her linguistic and cultural knowledge and is inspired by the original content to create something new and original in the target language.

This site uses Akismet to reduce spam. Learn how your comment data is processed.

I am a certified French and Mandarin to English translator specializing in corporate communications, financial documentation, and marketing. I am passionate about helping companies communicate with their English-speaking stakeholders.